Whew!  What a day!  This day was full of ups and downs – literally!  This was the first day that we took an extended truck (tap tap) ride to our sites.  Let’s just say that the worst roads in the US are the best roads in Haiti.  Oucheewawa!  I need to be sitting on a  pillow right now – ha!

Well, here is how the day has gone:  We awoke to chickens croakin and roosters crowin as we have everyday.  J  Breakfast was some great oatmeal that we could add some cinnamon and sugar.  Afterwards, we loaded up with our water bottles and headed towards Bombardopolis to visit the hospital there.  Imagine a small bed truck with three people in the cab, two people on top of the cab, and then nine people on the rim of the bed of the truck.  Our top speed may have been 15 miles an hour – maybe.  Most of the ride was watching out for potholes and just hanging on due to all the bumps!

We arrived in Bombard an hour and 10 minutes after we set out from the Mole.  We met Faith and her husband, Steve, the missionaries who ran hospital, who were very gracious and allowed us to pray for the patients.  We first started in the pediatric room where two children were in their beds.  The first, Christie, was no more than three for sure, who had broken both her legs in a car accident.  Both legs were hanging up in traction.  I had the chance to pray with her and her mom.  Dave and Gayla made balloon flowers and Ami passed out the stuffed animals.  The second child was just over a year old and suffering from seizures.  I also had the chance to pray for him and the family as well.  Next, we split up with Dave, Gayla, Paul, and Jason giving out balloon sculptures.  Ami passed out the stuffed animals as well.

Next we traveled to Marouge, just over another hour ride.  We met Pastor Caesar who was very nice.  We took a short break and then walked from the pastor’s house to the church, probably a good ½ mile distance.  We arrived at a thatched frame no bigger than a single car garage with 60 kids waiting for us!  Once we got started with our VBS, we had at least 75 kids.  We started with songs, Barb told the wordless book story, we split the kids into two groups – craft and sports activity.  Gave the kids snacks and then switched groups.  I finished the VBS with the story of Jonah.  On the way, we gave the kids pencils, stickers, and the Crystal light packages.

Then, we headed home for another 1 and 20 min trip on the truck.  Now it is time for dinner.  As I type this, I realize that I will never complain about the potholes in Kansas City ever again . . . .

The day was long and rough. We took a tap-tap to Bomboropolis and then to Mare-rouge. It was an interesting trip to say the least. 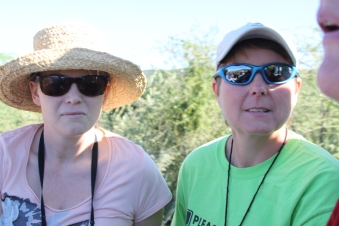 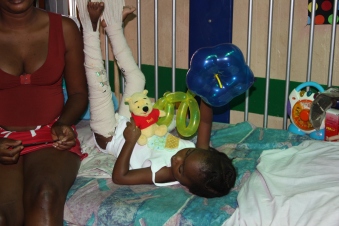 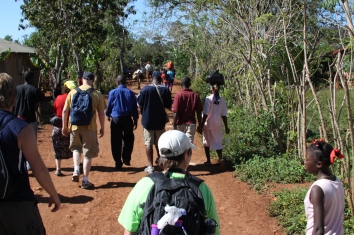 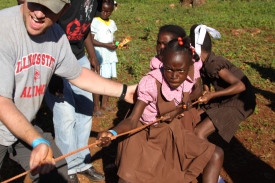 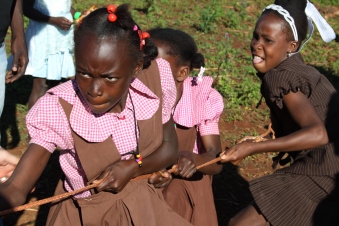 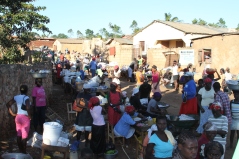