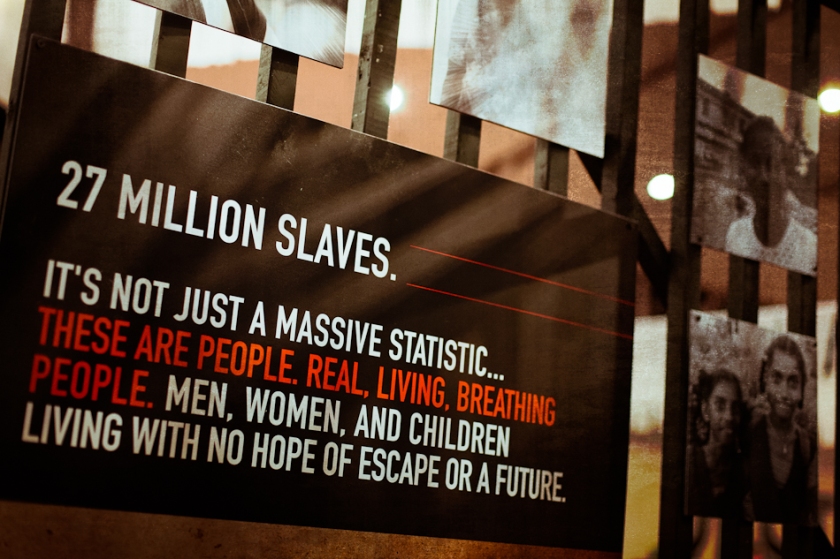 There are 27 Million Slaves all over the world. The number is HUGE! When I see that number I think – how in the world are we going to change that? What’s even more unsettling is that we don’t even TRY to!

I’m sure it’s wide-spread – in every country –  human trafficking & kids forced to have sex at a young age. Those of you who’ve been to Haiti have heard the countless stories of things  – not just happening all over the world – not just in my country – not just behind closed doors – but right in our face.

The Land of Milk and Honey…

When the Israelites came to the wilderness of Paran, they were very close to the land God had promised them. One more march would take them across the border and into the beautiful country.

And the Lord told Moses, “Send twelve men into the land of Canaan to spy out the land.”

For forty days the spies went here and there through the Promised Land. They saw strong cities and small towns. They saw fields of grain and large vineyards of grapes. The land was beautiful and full of all kinds of food. In this land they would not become hungry for meat, fruit, or vegetables.

When the spies returned to Israel’s camp, they brought samples of the fruit that grew in Canaan. Two men carried one large cluster of grapes on a pole between them. Never before had the people seen such wonderful fruit.

Then ten of the spies told about Canaan. “It is a rich land. We brought you some of the fruit that grows there. But the people live in great walled cities.” And the Israelites talked to one another about the report.

Finally Caleb, another spy, quieted the people and told them, “Let us go at once and take the land, for we are well able to overcome it.”

But the ten spies did not agree. They said, “We cannot go into the land, for the people are stronger than we.” The people were frightened when the spies said, “The men of that land are so big they make us look like grasshoppers.”

The people were so disappointed that they cried all night. When morning came, they complained against Moses and Aaron. “We wish we had stayed in Egypt! We wish we had died back in the wilderness rather than be killed by the giants of Canaan. Why has God brought us out here to die? Our wives and our children will be taken prisoners.” The people even planned to choose a captain and go back go Egypt.

When Moses and Aaron heard about the plan, they fell on their faces and begged the people to obey God. How could these people doubt God’s great power after he had brought them out of Egypt, led them through the Red Sea on dry land, given them water from a solid rock, rained food from heaven, and protected them from their enemies?

Caleb and Joshua, the two spies who had faith in God, tore their clothes because the people did not trust God to give them Canaan. They pleaded with the people, “The land we searched is a wonderful land. The Lord promised it to us. Do not turn back or be afraid. The Lord is with us. Let us go forward!”

Sometimes Miss Beth and I feel like we’re Caleb and Joshua! Everyone seems too scared or uncertain to move forward! But I just can’t wait any longer for others to feel comfortable with it.

I was listening to Mark Batterson speak at Catalyst. He talked about how when his church was growing –  he needed a drummer for the band he was wanting to put together. He kept praying for a drummer. But no one ever volunteered.

He said he felt like God told him – Why would I give you a drummer when you don’t even own a drum-set? He kept thinking – why would I get a drum-set when I don’t even have anyone who can use it? But God kept telling him to have faith. He didn’t have much money but he went out the next week and got the drum-set. Not even a week later and a drummer showed up ready to join the band!

Only God KNOWS the details for how this messy ministry will function! The only thing I KNOW is I have to to take the first step.

Besides an enormous amount of faith, wisdom, prayer, perseverance, strength, patience, & courage…. I know that

I need funds to build an abuse center. It will have rooms for classes so that we can start small groups for children, teens, & adults who are dealing with abusive situations. There will be an emergency room in the back so that children & mothers can flee from an immediate abusive situation and know they are safe for the night until it calms down.

I need funding for micro-financing loans so that mothers will quit pimping out their very young daughters – and have another way to put food on the table.

I need funding for some sort of half-way house/transition home for those we are able to set free.

I need counselors & psychologists who can come to train, equip, & help in this center.

I need you – – – your voice – your talents – your money – your resources – your experience – your testimony – your friends – your family – your prayers – your wisdom – your love & your support!