I often get asked if Haitian Carnival/Mardi-Gras Season is voodoo? Or is it culture? Or is it tied to any sort of religion?

Things that make you go – Hmm….

I think if you checked Carnival’s Facebook status it would say: It’s complicated.

Mardi Gras literally means “Fat Tuesday” in French and is associated with the Roman Catholic custom of Lent. The idea behind Mardi Gras or Carnival Celebrations is that people overindulge before giving up something for Lent – which begins the following day with Ash Wednesday. (Which I don’t agree with the idea of partying before repenting).  But I also think you can enjoy parts of Carnival without doing the walk of shame the next morning…

Carnival has become a potent vessel for a people’s telling of Haiti’s history. I love to watch and learn how they interpret that history – because every village celebrates in their own way.

The problem is… voodoo is a big part of that history.

See what i mean…it’s complicated.

Every year at this time –  I sit and chat with our staff, pastors, & friends trying to clarify these very questions. I want to enjoy this culture I live in without compromising who I am in Christ.

There are parts of Carnival that are absolutely beautiful! The pride that they take in their country – some of the rich heritage music that is played – the time spent practicing dances & creating outfits – it’s something to be admired… AND to be celebrated.

Christopher Columbus landed in the Mole when he came to Haiti. We have his anchor in the mayor’s office. So seeing a float in the parade to celebrate that part of history  – that’s great!

We are also a Beach Village – so a little mermaid being pulled on a cart…  that actually makes sense too.

There’s also nothing wrong with donning brightly colored scarves & outfits as you dance in the parade.

There are however – floats/dances/costumes – that make fun of Christ…  or at least strongly represent a darker part of their culture.

You will see in some of the pictures –  men dressed with scary masks, cracking whips, & covered in white strips of papers. You know – all in “good fun”.  This part of Mardi-gras makes me really sad.

They glue strips of paper to themselves…. which means they have to rip up paper.  You always know when they’ve been down your street because they shed their paper everywhere they go.

What’s been ABSOLUTELY heart-breaking is finding strips of God’s Word on the ground. This is God’s Holy Word. They are ripping up Bibles to use for their costume.  aww…. so very disheartening.

The girl dressed in red/blue sitting on the donkey –  I’m told that is a jab at Christianity.

Last year I took care of a really sick child in the clinic. Her mother found me later that day and gave me some green glitter in a little bag and she invited me to be IN the parade.

I thought it was so sweet. So I went and shared this kind gesture with our staff – so touched. I mean the lady spent money to buy it for me and she made an effort to walk all the way back to the mission.

SO ALL THAT TO BE SAID: It’s complicated. 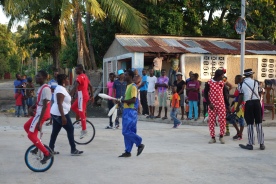 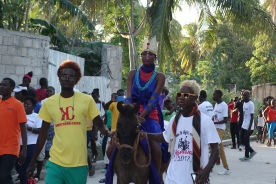 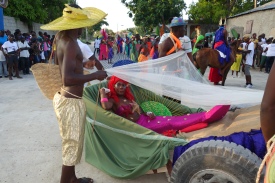 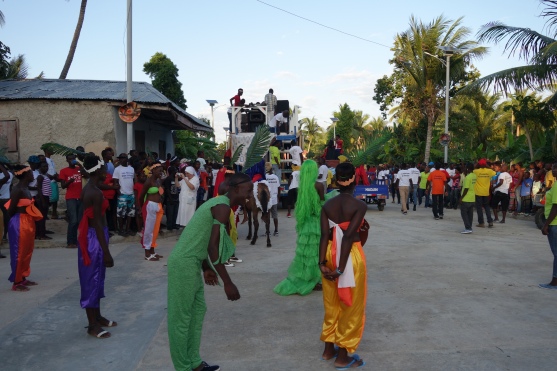 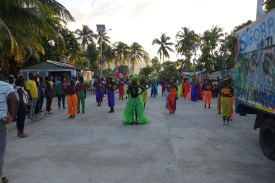 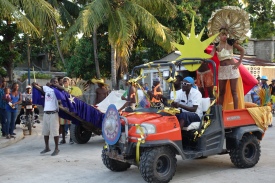 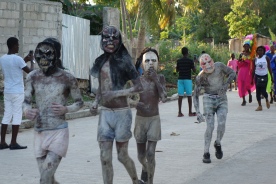