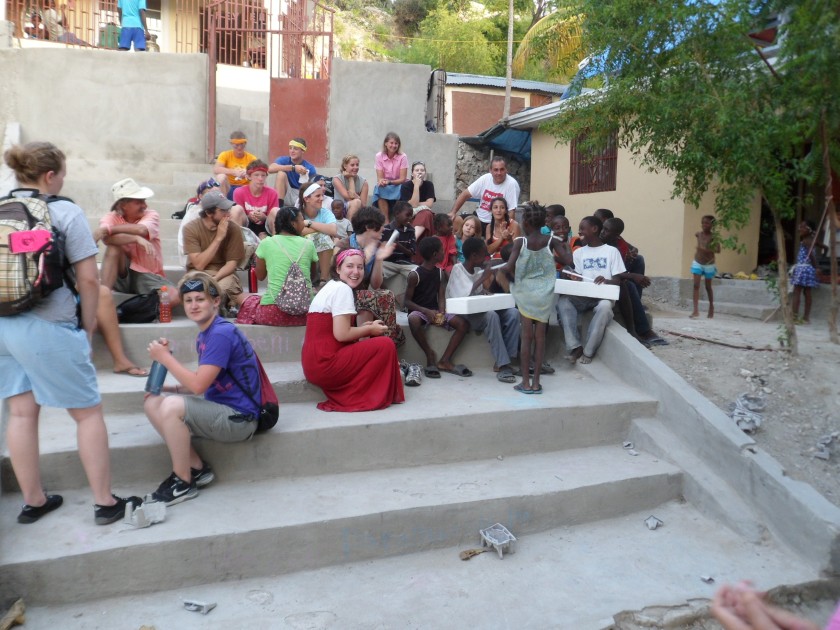 Hey y’all this is Maya from Savannah:) Today is Sunday so we were able to sit in on an amazing Sunday service. It is a lot different from a normal Savannah Christian service. It is around 2-3 hours long. The service took place under a tent which was awesome and hot. There were many Haitians there and I ended up giving up my seat for a Haitian woman. I was so excited because there were so many people there. The best part of the service is when they would stand up and sing. They raised there hands and clapped and sang for the entire world to see, all I could do is simply smile. As I closed my eyes listening to the chorus of their voices I realized how lucky we have it but we don’t worship like they worship. They have this genuineness to them. Its something incredibly beautiful I simply cannot describe it.

After the service I had the privilege of sitting behind and watching Allison talk to a group of women that are going to start a small group ministry. She encouraged them and gave them some good points about living as one. She talked on how leaders should act. What I love about Allison is that she always has this smile when she talks. She acts so well with them. She makes them laugh the same way she makes everyone around her laugh. It is definitely something I look up to. I was amazed with what goes into preparing small group leaders. It made me appreciate them a lot more.

We had a lot of chill time before dinner but it was still packed filled with fun. I taught some of the translators Chinese. They seemed extremely surprised that I was Chinese. It was hilarious. They began to mix French, Creole, Spanish, English, AND Chinese. It cracked me up. They were so excited. One of the translators began saying things like “Ni hao. (hello) Comme esta? (how are you?) mwen bien! (good)”.  That’s a mix of chinese, spanish, and then creole. I love Haiti so much! Even though this is my 5th year going to Haiti everything around me still completely amazes me and leaves me bewildered. I wonder how they can be so thankful when they don’t have much to begin with. It makes me look back at my life and wonder how much I take for granted. They love God with a passion something that you don’t get the opportunity to see everyday.

And with that I am signing off. So good night:)

YAY GOD! This is Jordan Thrift! What an amazing day! We woke up and went to church and yet it wasnt in english, seeing them praise the lord was incredible. Being here in Haiti has really opened my eyes, the kids have yet to nothing and they are so happy, it has opened my eyes. The families have a new struggle everyday and they never blame God and never doubt him or give up on him and his word. I have learned a lot from them and every second I am here gets better and better! Stories do not compare to seeing it with your own eyes!

Greetings all!! Abby from Parkside here getting to fill you in a bit on our day. As it is the day of rest, we had a light schedule and plenty of time to reflect on the past few days. We began a bit early with breakfast and moved right along to the church service which took place in a large army tent. Though there were over a hundred there (by my estimation), everyone crowded in and shared seats so we could worship together. The best part for me was getting to hear the love and devotion the Haitians had while singing hymns. It warmed my heart.

Following service we had a bit of time before lunch that was used to nap, journal and comune with the two different groups. After lunch (which was a delicious combination of rice, tuna and onions) we had more time before we learned a Haitian trade. Most of Parkside found themselves at the beach, frolicing, cooling off and burying on of the boys in the sand. It was wonderful and refreshing.

Three o’clock rolled around and both groups split up to learn a Haitian trade. I got to go with the group that learned how to make charcoal. Wood is gathered and piled into the shape of a hut, then green branches with the leaves still on them are put on top, along with dirt. It is then surrounded by rocks to keep it in it’s shape and burned slowly over three days. One of the girls in our group got to cut up a branch and used a machete. Don’t worry parents; all digits are accounted for. Since we finished early we were able to join up with the weavers and learn that trade as well. I have to say my section will have to be tightened or pulled out.

I’m sitting above the clinic right before dinner and loving the breeze that’s coming in. I’m looking forward to hearing about the fishing adventures and the ways that other people saw God today. For me, it was seeing our fellow church goers lifting their voices to praise our Lord. 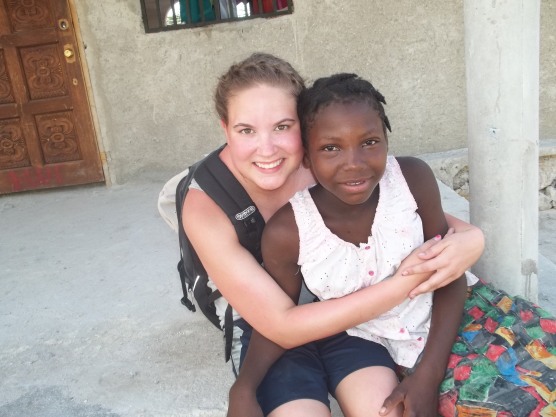 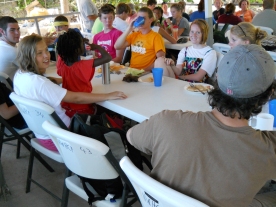 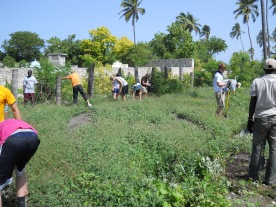 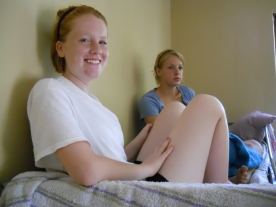 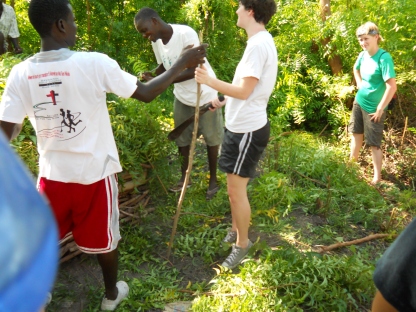 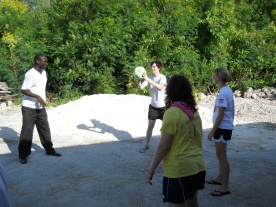 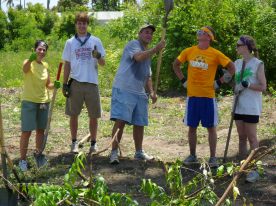 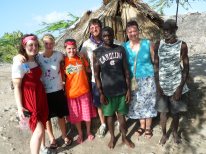