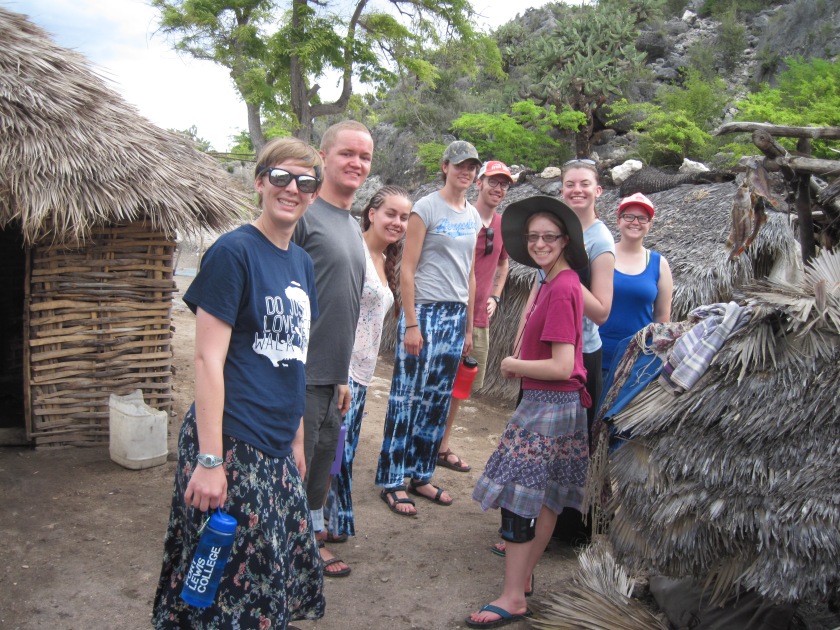 (This post was from yesterday. There were technical difficulties getting all the pics to upload).

Hey all! It’s Jen here bringing you the next round of action! It started off last night when it was raining cats and dogs. While the boys were moving their beds into the cafeteria to avoid getting drenched, all us girls couldn’t help but think “I’m so glad that we are sleeping in a dorm so we don’t have to deal with all this.” Little do we know that nights rain wasn’t a straight downpour but it was coming in sideways! Right through our windows and down the side beams of our room it soaked over half our beds and sheets! Lucky for most of us we had spare sheets so we didn’t have to sleep in the wet ones. This whole ordeal made me stop and think about my brother and dad’s trip to Philmont Scout Ranch where they got poured on the whole 10 days there. I now have a newfound respect for them sleeping in wet sleeping bags and tents the entire time. Kudos to you.

This morning kicked off a humbling chain of events. At about 8 in the morning our team, as well as the church’s womens group, loaded some plastic tubs onto a small motorboat to take to a little fishing village named Kapafu. During the boat ride over, which lasted about 45 minutes, Bailey, Natalie, and I had a wonderful conversation about an upcoming children’s book series. It will include exciting characters such as Bart the Heart and Sidney the Kidney. Stay tuned for our book release (if you are reading this, we’ll even sign your copy for free)!

This trip to Haiti has really made me think about the meaning of “poor” and all I can say is I have never seen so much richness in such a poor community before. Their houses were no bigger than many of our bathrooms (maybe even walk-in closets), made almost entirely out of things found around them, and had very few belongings. Despite all of this, every member of this community was overflowing with joy and had smiles from ear to ear. These wonderful people understand that Jesus is all they need. What’s even more humbling is that they are completely content with the fact that much of the time, Jesus is all they have.

After a very moving service full of singing and loud “AMENS”, we proceeded to play dominos and Jenga with them. These little games brought them so much joy and happiness I wish I could’ve stayed and played with them all day. Unfortunately, the sky was starting to look a little grey so we had to pack up and prepare to leave. Before we left, the womens group passed out the goodie tubs and though there was only a little in each tub, the community was so appreciative of everything they received.

Upon leaving, everybody thanked us and there was this one lady in particular who came up to our team and shook all of our hands and thanked us personally. Because I was the last one, she pulled me in and hugged me like she was never going to let me go, thanking me the whole time. Some of you might be thinking that I felt pity for her, but it was almost the opposite effect. I felt pity for everyone back home in the states who would never get to experience this joy, whether it be out of refusal or because they have never had an opportunity to learn about God and to experience the peace he brings. I pray that in our crumbling society this is something that we never lose sight of.

After we got back to the Mole we decided to go and hang out with the orphans. All I’ve got to say about this is even though it was one of the coolest days we’ve had here, I’ve never sweated so much in my life! I’m talking about a steady stream of sweat running down my face the entire time we were there. The kids wanted to be held, and twirled around and there is no way to say no to such adorable faces! Inside the orphanage there are pictures hanging up of all the kids and they were so excited to name each one to us, multiple times at that. One little boy I was holding even went so far as to get a meter stick so that he could show me exactly which name went with each face. Once everyone calmed down a bit, a couple of the girls proceeded to start braiding my hair. Though they didn’t get very far due to the fact that they constantly had to stop to wipe sweat off my face and untangle my hair, I could tell that braiding some hair was better than braiding no hair.

After lunch, we were able to relax and play cards for a little bit before VBS started. Some of these kids were so excited to come to VBS that they showed up two hours early! Today at VBS the kids learned about the gospel and how God LOVES his creations. During my group’s craft station (our last station) we decorated some construction paper crosses. I sat down next to a group of boys and proceeded to decorate my own cross which read “Jesus ❤ me” and a little palm tree in the top half. The boy sitting next to me decided to do the exact same thing on the back of his cross. This lead to him and the rest of the boys saying, “Jesus love me” over and over in both English and Creole.

This was so amazing for me to hear, especially with the assurance that they possessed while saying it. After the other two groups came in and my table began to fill, a few of them started counting “one, two, three” to me over and over. I then taught them how to count to 10 in English, something they all picked up almost immediately. Then it was my turn. They taught me up to 30 in Creole, laughing with each new number at my American accent and my inability to say the number 8. At one point, even one of our interpreters was trying to help me out and we collectively came to the conclusion that the number 8 in Creole and I just don’t make a good pair.

While walking the kids home, we all had at least one kid in each hand, sometimes more. On the way into town there is a bridge that we have to cross. Because of the recent rain there happened to be a few puddles. Without missing a beat, the kids offered to hold up mine and the other girls’ skirts to that they didn’t get wet while walking through the puddles. This is just another example of God’s love pouring out of these kids and it makes me nothing less than overjoyed.

Since then, it’s been a pretty relaxing night filled with card games and a movie with all the kids on campus (including the orphans). I can’t wait to see what tomorrow brings for all of us! Thank you for keeping all of us in your prayers and for all of the support you have given and continue to give! That’s all for tonight! Check back in tomorrow night for more exciting tales of “Rooted in Haiti.” J-dawg signing out.

P.S. Much love to all my family and friends back home! I miss you and I’ll see you all soon! Xoxo

P.S.S. We were talking about dinner at Kimmy’s parents’ house tonight and we just wanted to make a shout out to Laurel and Craig for the bomb pizza! Merci!!

P.P.S.S. We just want to let everybody know that though it is raining, it is not a cold rain, but a warm rain. Imagine walking around in a wet Snuggie in 110% humidity. NOT FUN! BUT! We all look quite svelte from losing all the water weight. 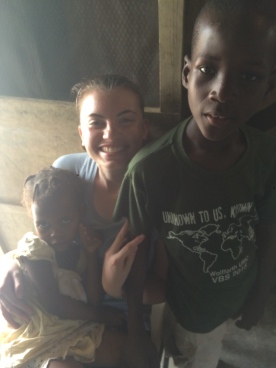 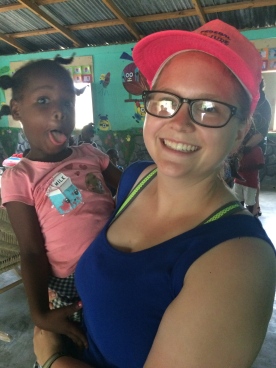 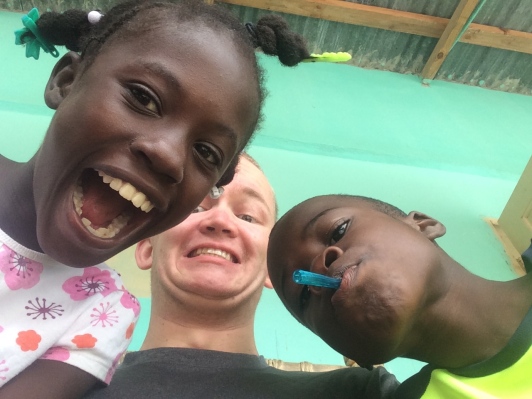 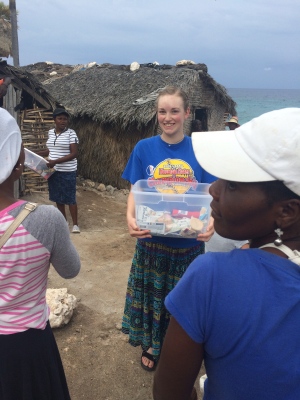 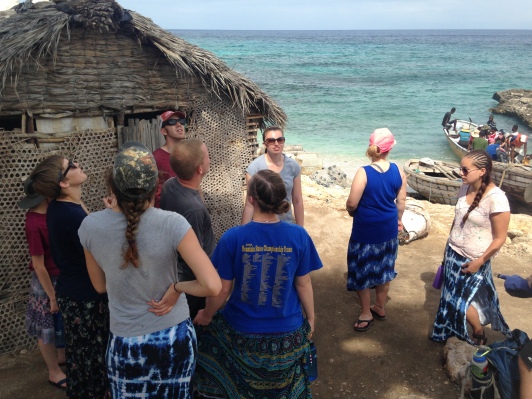 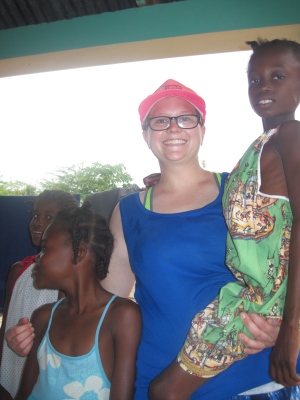 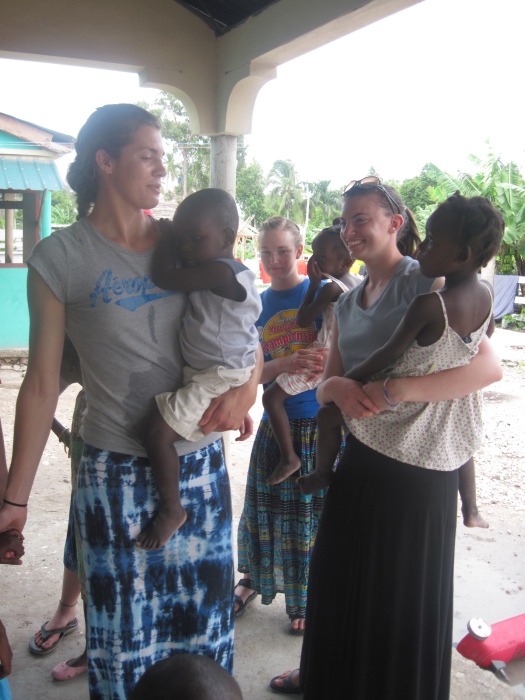 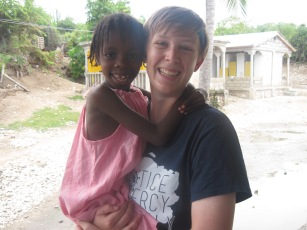 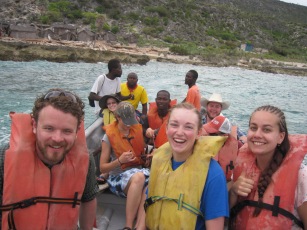 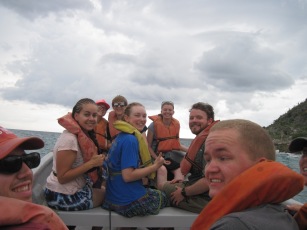 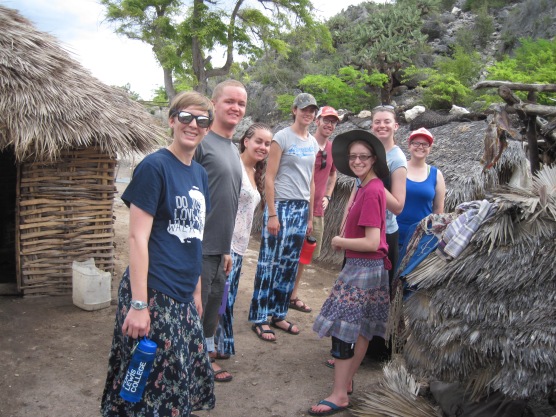 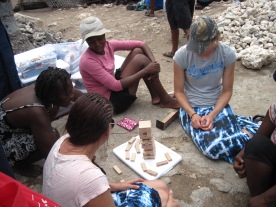 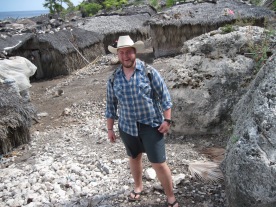 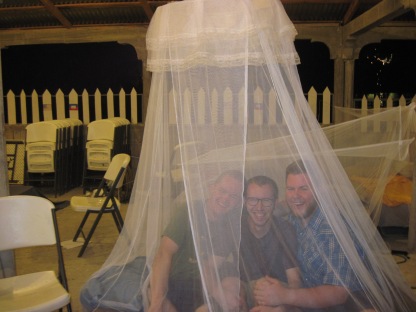 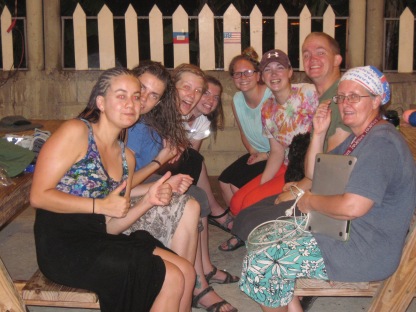